In the world of cannabis, three types of plants produce the flower we consume. They’re categorized as indica, Sativa and hybrid. Each word represents a type of plant and not necessarily the effect you receive when you consume the product.

What?! We know! It conflicts with everything we’ve been told about cannabis, so let us explain!

The words indica, Sativa and hybrid, which are used widely in cannabis stores and on product labels describe actual plants—not the effect you receive from the cannabis.

Pollen science tells us that 28 million years ago, the plant Cannabis Sativa (its scientific name) evolved on the eastern Tibetian Plateau and spread across Central and East Asia into places including Pakistan and Afghanistan. The varied natural environment there, along with travelers and traders, moved the plant across Asia, where it was grown for its strong fibers and medicinal properties.

Cannabis sativa plants are tall, thin and grow best in warmer climates. Indica plants are thicker and bushier and grow best where it’s cooler. Think deserts and plains vs. mountains and valleys. Hybrids are like any other genetically modified plant—they’re bred to grow well in multiple climates or wherever the cultivator might live.

At IndiGrow, we grow, process and sell six strains of cannabis. Three are from indica plants, and three are from Sativa plants. Instead, our focus is on growing “landrace” strains and select hybrids of those landrace strains—we call them our “heirloom” strains. A landrace strain is a non-hybridized origin strain, something we’re excited to bring to the Muskegon market. Many cannabis cultivators hybridize the plants to a specific taste, smell and THC potency.

So if you’re looking for London Lemon Wedding Cake Girl Scout Gelato Glue, we will not be able to serve that up!

The landrace strains we’re growing are some of the most terpene-rich and tremendous cannabis you’ll experience.

Why, then, would a Sativa plant give you an uplifting high and an indica provide a relaxing experience? The plants don’t do that—the terpenes in them do!

Terpenes are naturally occurring compounds in plants responsible for the smell, flavor and effect each cannabis plant produces.

Every strain of cannabis has a unique terpene profile. More than one hundred terpenes can be found across all cannabis plants, though usually, there are only a few that are primary to each plant.

Myrcene is primarily herbal in its scent. It also might smell like hops and lemongrass. It helps with relaxation and mood-lifting. It is found in our African Frost, Blueberry and Pakistani Chitral Kush strains.

Pinene, as you might guess, smells like pine, rosemary, dill and basil. It helps to boost energy and is sometimes suggested for gastric issues. Found in our Kwazulu strain.

Caryophyllene is peppery in scent, like black pepper, cinnamon and cloves. It’s one of the most distinctive scents and is known for its anti-inflammatory properties and is often found in topicals. Found in our Kilimanjaro and African Frost strains.

Limonene is citrus-scented, so think about fruit peels like orange, lemon, juniper, and peppermint. It’s pretty uncommon in most cannabis strains, and only trace amounts of it can usually be found in lab testing. However, it’s known to be a mood-lifter and might aid in digestive issues. Found in our Kwazulu, Kilimanjaro and Blueberry strains.

Ocimene is sweet and herbal in scent and is believed to act as a plant-defense and thought to have anti-fungal properties. It is sometimes used in perfumes. Found in our Pakistani Chitral Kush Strain.

Terpinolene as a terpene is found in apples, tea tree and lilac. As an essential oil, it’s sometimes found in soap and is known to be an insect repellent! In cannabis, it smells fresh—like citrus and pine. It’s being studied for anti-cancer and sedative (anti-anxiety) effects.

Phytol is grassy in its scent and is known for its relaxing effects and is researched as an anti-convulsant.

Eucalyptol smells like menthol or mint, and it may have anti-bacterial and anti-fungal properties and eucalyptus clears the sinuses when inhaled.

Alpha Bisabolol is a common cannabis terpene found in chamomile and has a gentle, sweet flowery scent. It’s soothing for the skin and calms the mind.

Humulene is distinctly hoppy in its smell (it’s the primary ingredient in beer) and is woody and spicy in its scent. Research shows that it has anti-bacterial, anti-fungal and anti-inflammatory properties.

At IndiGrow, we post our lab results with terpene profiles near our sniff jars, so you can see what terpenes exist in our flower.

A cannabis strain’s specific terpene and cannabinoid profile are responsible for the effects you experience when you consume it. You’ve likely heard of cannabinoids, including these well-known components of the plant—THC, CBD, CBN, CBG and CBC. Cannabinoids and  terpenes work harmoniously to have particular effects; this is called the “entourage effect.” THC and CBD work best in unison, so THC-rich cannabis with some CBD works betters than THC alone and CBD with a tiny amount of THC will likely be more effective. 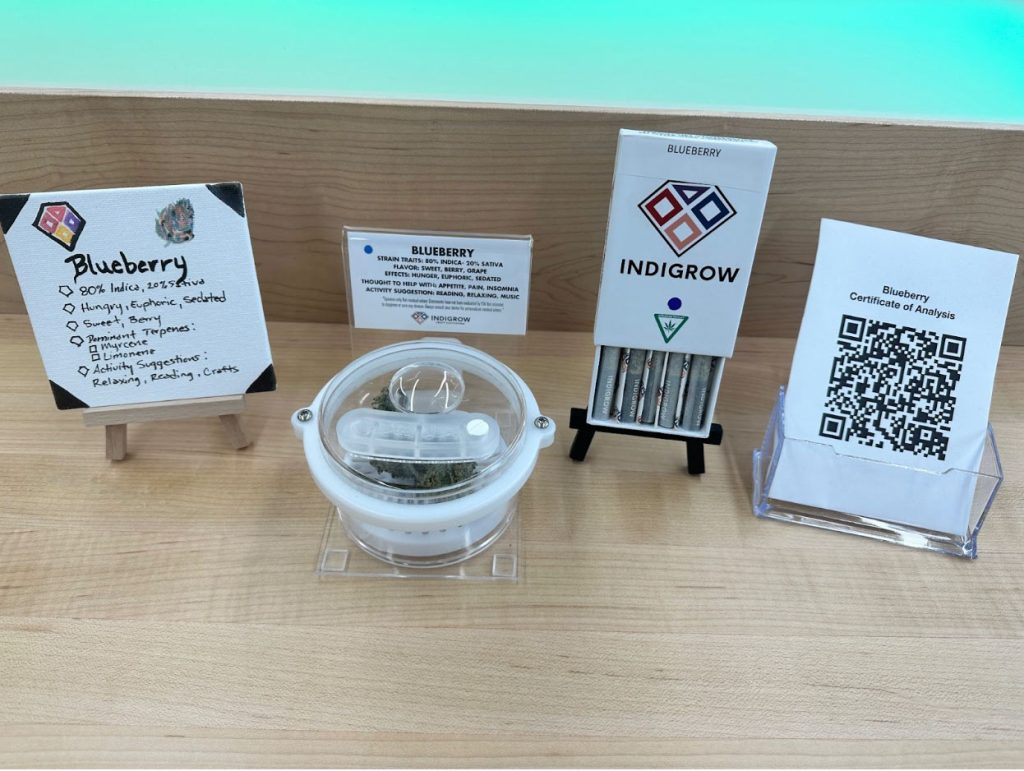 Leaning on just one cannabinoid from the cannabis plant translates to missing out on a fuller and more holistic experience. For example, many vape carts on the market are made with THC distillate, meaning they have lots of THC and nothing else. Our Energy carts have both THC and CBD for a better overall effect.

When you experiment with different strains, which we hope you will do—it’s a smart idea to take note of what tastes best and works best for you.

And the next time you’re asked whether you prefer Sativa or Indica, respond with, “Tell me about your terpenes.”

As always, with medical conditions and symptoms, please consult with your physician for medical advice. The statements made regarding cannabis products have not been evaluated by the Food and Drug Administration. The efficacy of these products has not been confirmed by FDA-approved research. These products are not intended to diagnose, treat, cure, or prevent any diseases.

Get Indigrow News and Deals Right to Your Inbox! Sorry, you are not allowed to view this website.